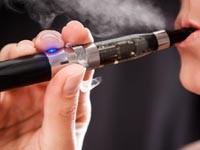 Electronic cigarettes, or e-cigarettes, are growing in popularity. How will they affect your health…and your insurance coverages?

Cigarette smoke contains more than 4,700 chemical compounds, which can affect the smoker and anyone within breathing distance. Proponents of e-cigarettes say they are safer than cigarettes because they do not produce smoke. Instead, they convert a liquid that contains nicotine plus flavorings and stabilizers into a vapor that the user inhales.

While it’s true that e-cigarette vapor does not contain as many compounds as cigarette smoke, it still produces byproducts whose health effects remain unknown. The FDA opposes e-cigarettes, saying they “may contain ingredients that are known to be toxic to humans.” And because e-cigarettes are not regulated, there is no way to know how much nicotine—an addictive drug—they deliver.

E-cigarette use might also affect those around you. A study led by Maciej Goniewicz, a researcher and assistant professor of oncology in Roswell Park Cancer Institute, found that vapors released from e-cigarettes into surrounding air do contain nicotine. “Our data suggest that secondhand exposure to nicotine from e-cigarettes is on average 10 times less than from tobacco smoke. However, more research is needed to evaluate the health consequences of secondhand exposure to nicotine from e-cigarettes, especially among vulnerable populations including children, pregnant women and people with cardiovascular conditions,” he said.

The study, one of the first on the safety of e-cigarettes, had several limitations. It focused on nicotine and a limited number of other chemicals released from e-cigarettes. Researchers noted that future research “should explore emissions and exposures to other toxins and compounds identified in e-cigarettes, such as formaldehyde, acetaldehyde and acrolein.” In addition, more research is needed to determine whether vapor from e-cigarettes can deposit onto surfaces to create “third-hand” vapor.

E-Cigarettes and Your Insurance

If you get your health coverage through an employer group plan, the Affordable Care Act allows your employer to charge you up to 50 percent more for your coverage if you are a tobacco user. It may be tempting to refrain from disclosing your e-cigarette use on your application, but if a blood test reveals nicotine in your bloodstream, an insurer could conceivably rescind, or retroactively cancel, your coverage. Although the Affordable Care Act generally prohibits insurers from cancelling coverage unless it cancels coverage for all similarly situated individuals in your state, it allows rescission in cases of fraud or intentional misrepresentation of material fact.

You’ll also pay more for life insurance if you smoke. A very informal survey of several leading life insurers indicated that many charge higher rates for e-cigarette users as well.

What about wellness? E-cigarette manufacturers and sellers say the devices can help smokers quit, but many health officials aren’t so sure. Thomas J. Glynn, PhD, American Cancer Society’s director of cancer science and trends and international cancer control, discussed a recent study from New Zealand, which followed 657 smokers who wanted to quit over three months. Participants received either e-cigarettes, nicotine patches or placebo e-cigarettes, which contained no nicotine. The e-cigarette users were slightly more likely to quit smoking than the other participants, but differences were not statistically significant. And with only a 7.3 percent quit rate, e-cigarettes did not work miracles for smokers who wanted to quit.

Realizing that non-smokers have lower medical costs than smokers, many group health plans have long provided coverage for smoking cessation programs. Under the Affordable Care Act, all new private market plans and exchange plans must cover tobacco cessation programs with no copayment or coinsurance, even if you haven’t met your yearly deductible.